CTC Marine Systems (part of the DeepOcean Group) is leading global developments in trenching and cable laying systems using the most advanced fleet of jet trenching ROVs in the world.

CTC Marine Systems were involved in a large scale cable deployment programme in the waters off the coast of South Korea.

As a result, there was a need to increase production capacity and install further production equipment. 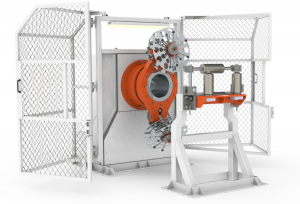 The Meltech team worked closely with CTC Marine to fully understand the demands of the operation. As a result, a second head was incorporated within the system to proide redundancy and allow continuous operation in the event of electro-mechanical failure.

Meltech’s engineering expertise meant that they were able to customise an existing design, allowing specific tape types to be utilised with the required lengths.

In order to meet CTC’s production demands, the machine was also adapted for marine use, enabling it to be mounted and used on board the deployment vessel..

The marine specification taping head has proved itself a reliable and robust piece of equipment requiring little maintenance to keep it running to the best of its ability.

Our client’s challenge Oceaneering identified a need to modernise their...

Our client’s challenge nkt cables were building a new factory...

The customer Part of the Technip Group, Duco is a...